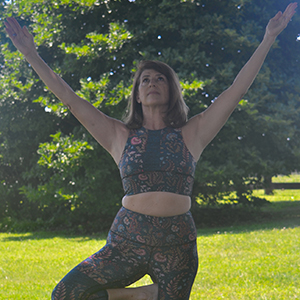 Debra entered the Yoga Time Studio for the first time in 2015, and quickly became a yoga junkie. Suffering from frayed tendons and too much cardio kick boxing, along with the grief of losing her mother that year, yoga became the physical and mental therapy she needed to recover from this trauma. Teaching was always a goal, however it wasn’t until the global pandemic she seriously considered becoming a yoga instructor. During isolation, Debra received her 30-hour Holistic Yoga Flow certificate authorized by Inner Dimension Academy in a virtual format. However, when the live 200-hour teacher training was offered by Yoga Time, Debra signed up and earned her certification in July 2022. She enjoys weaving some of her dance background into her classes, along with lyrical music to accompany the movement. When not practicing yoga, Debra works at a global law firm as the Director of Business Development Training & Coaching and loves spending time with her family and field golden retriever, baking, and playing golf.